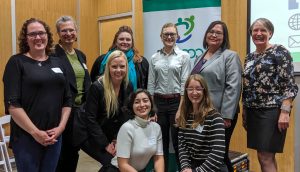 Nearly 100 co-op curious pairs of eyes and ears intently absorbed the inspiring words of seven change-making entrepreneurs at the BC Co-operative Association’s inaugural Co-op Week Innovation Forum. Tying together the themes of Co-op Week, the then upcoming federal elections and the release of the M-100 study from earlier this year, the Innovation Forum proved to be a much-needed gathering for the co-op sector in British Columbia.

While there were many outcomes from the event to be excited about, the greatest indicator of a positive shift that will help grow the co-op sector is in the variety of people who attended our sold-out forum. We are particularly proud to have highlighted seven female entrepreneurs from all walks of life and backgrounds. This representation is a reflection of the co-op model’s function as a democratic, inclusive, and diversity-leveraging tool, which was mirrored in the audience as well. Young people, members from co-ops of all sizes and degrees of establishment, government representatives, and more came together to learn and collaborate. Lisa Giroday of Victory Gardens notably remarked that “co-ops don’t allow for inequity.”

From such rich dialogue stemmed several suggestions for steps moving forward. Trista Pewapisconias, Indigenous Relations Lead at Co-operatives First, reflected on the M-100 findings reminding us that ‘indigenous culture’ is such a broad statement.  “As I’m working with more and more indigenous communities,” reflected Pewapisconias, “… [for some], the democratic structure and the way that the co-op structure is, is a perfect fit. But it just depends on how the community itself wants to use the co-op structure.” Further, a common thread between First Nations communities and both women and youth entrepreneurs was the theme of ownership.

Jessica Valentine, a worker-owner of Wood Shop, advocated for the co-op model as a way for young entrepreneurs to learn about managing finances and how to control their professional lives now and in the future. Several panelists acknowledged the co-operative values as being a big part of why they became involved as a professional within the sector.  For Kateri Gutierrez, seeing a lack of accessible community spaces in her hometown of Lynwood, California, a largely Latino community, was a gap that was not being filled. This prompted her to create professional and social opportunities through Collective Avenue Coffee to formulate an answer to the lack of local community spaces.

We live in a heavily evidence-based world where research and figures can go a long way. Central Co-op Marketing Director Susanna Schultz saw a need for data to back up Central Co-op’s co-operative difference amidst stiff competition from other retail grocery stores in the Seattle area. Through an impact study, Central Co-op found that even without factoring in the multiplier effect, $0.52 of every dollar spent at the co-op went back into the local Washington economy, whereas another conventional chain grocer of a similar size and profile saw only $0.23 of each dollar circulating back. “What would it look like if every one of our members in the BCCA took on the same challenge as Central Co-op in measuring their impact in community?” Andrea Harris, BCCA’s Executive Director, mused. “What story could we tell our local, provincial, and federal governments about the co-op sector in BC?”

“What would it look like if every one of our members in the BCCA took on the same challenge as Central Co-op in measuring their impact in community? What story could we tell our local, provincial, and federal governments about the co-op sector in BC?“

Continuing to lobby our provincial and federal governments was another theme that appeared throughout the forum’s discussions. While we are seeing major progress, Christina Baker of the Canadian Co-operative Investment Fund suggested that BC look into capital raising opportunities, such as a community bonds program, that have worked for co-ops in other provinces such as New Brunswick. Kateri Gutierrez from Collective Avenue Coffee also spoke about alternative methods of raising capital, such as launching a GoFundMe campaign.

Having a cast of female leaders as speakers led to very necessary conversations about gender equity in different industries. Nora Menkin, Executive Director of The Co-op Funeral Home of People’s Memorial, walked us through the monopolized funeral industry and how gender is an active agent in shifting the narrative:

“Being a woman and starting this wholly new model in the funeral industry, I’ve definitely gotten pushback. Being in a male-dominated and male-owned industry, for the most part you get all these men in their same-looking suits, looking the same way, unfortunately, and now there’s this wave of women coming along and it’s really questioning how it goes.”

Jessica Valentine from Wood Shop echoed how tough it can be to break into certain industries, such as woodworking. When asked about what it meant to be a female worker-owner in such an industry, Valentine replied “it’s an opportunity for myself to be an advocate for women to enter into the trades, to be supported, [and] to not only move through training, but also to get employment in the industry.”

It is because of stories like these that the BCCA is proud of being a convener in the BC co-operative sector. We are committed to being a resource, a connector, and supportive hub for our co-operative community, striving to make our ecosystem a better place for co-operatives.

We sincerely thank you, our participants, for joining us at our BCCA Innovation Forum – your enthusiasm and curiosity helped shape the tone and passion throughout the evening. A big thank you goes out to our incredible speakers and our sponsors as well: Co-operative Housing Federation of BC, Realize Strategies, Community Evolution Foundation, The Co-operators, Co-ops and Mutuals Canada, Vancouver Co-op Radio, and Each For All – The Co-operative Connection.

Want to stay in the loop about local BC co-op news, events, job postings, and more? Sign up for our bi-monthly newsletter!

Check out the full gallery of event photos on our Facebook Page!

We'd love to stay in touch

Enter your email address below to subscribe to our quarterly newsletter for all the latest BC Co-op News.
We promise not to spam you, ever.