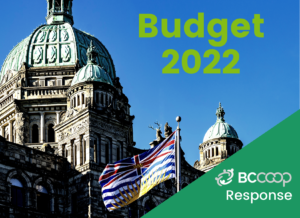 The BC Co-op Association welcomes these investments and notes that cooperatives are ideally placed to:

There are more than 700 co-operatives in BC, controlling more than $48 billion in assets. Forty percent of British Columbians are members of at least one co-op or credit union. Co-ops outrank mineral extraction, utilities, telecoms, accounting and payroll services, postal and courier services, and automotive manufacturing for jobs (182,253) and GDP ($61.2 billion). Childcare co-ops reduce costs by up to 50%, and Vancouver co-op housing is 55% less expensive than comparable market rents.

We look forward to working with the Government of British Columbia to build on the strengths of the co-op movement and better serve cooperative members and their communities across the province.