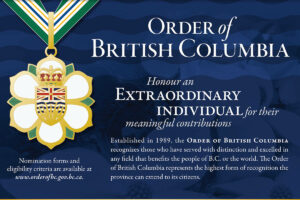 The award is extended to those British Columbians who have demonstrated outstanding achievement, excellence or distinction in a field of endeavour benefiting people in the province or elsewhere.

British Columbians are encouraged to nominate inspiring individuals who have left a lasting legacy in their respective fields. The Order of British Columbia is one way of rewarding and recognizing those British Columbians whose extraordinary contributions and achievements have benefited B.C. and beyond. Any citizen can participate by nominating persons whom they feel are worthy of this acknowledgement and honour.

Any resident of B.C. or former long-term resident who has demonstrated outstanding achievement, excellence or distinction in a field of endeavour province-wide is eligible to be nominated. Fields of endeavour may include community leadership, business, labour, industry, art, sports, volunteer service, professions and other occupations.

Nominations and letters of support occur annually and must be received by April 9, 2021.