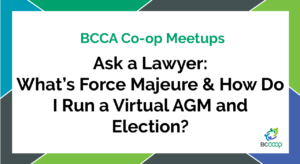 Our first Co-op Meetups session featured Mary Childs as our guest speaker. Mary is a lawyer with Vancouver office of Miller Thompson LLC and is a part of the firm’s Social Impact Group. She works with many co-operatives, charities, non-profits, and social enterprises and also sits on the steering committee of the CoopZone Legal Network, a Canadian network of people and organizations dedicated to providing legal services and information to co-operatives and to entrepreneurs who are considering starting a co-op. Mary is also a member of the BCCA board of directors and also chairs both our Government Relations and Member Outreach Committees.

Watch the full video recording of our Co-op Meetup: Ask a Lawyer: What’s Force Majeure & How Do I Run A Virtual AGM and Elections?

We’ve listed out topic timestamps at the bottom of this summary as well.

Almost all co-operatives will have contractual obligations that may be made more difficult or even impossible due to the current circumstances or have contracts with other organizations who will inform you that due to Force Majeure, they cannot fulfil their contractual obligations to your co-ops. If you are in a leadership position within a co-op (i.e. director or manager), here is some general, high-level legal information to help you act in the best interest of your co-op.

So What is Force Majeure?

Many contracts have a Force Majeure clause which sets out a list of events and the parties’ agreed upon response should any of the listed events occur. These clauses may:

Some key requirements of typical Force Majeure clauses include:

The consequences of the occurrence of a Force Majeure event can vary and the clause may only delay the obligations instead of terminating the contract in its entirety. For example, leases commonly have Force Majeure clauses saying that they don’t affect the tenant’s liability to pay rent. (Note: Mary covers an example Force Majeure clause in the video recording!)

What if your contract does not have a provision that covers Force Majeure?

Under the Cooperative Association Act, all BC co-operatives are required to hold their AGM within 4 months after the end of their fiscal year. However, on March 31st, 2020, in response to COVID-19 and the provincial and federal health guidelines and recommendations, the Registrar announced its decision to grant an automatic 6-month extension for all co-ops that wish to delay their AGM. While co-ops do NOT need to apply to the Registrar to request this extension, co-ops are legally obligated to inform their members that the AGM has been delayed. This 6-month extension is being interpreted as an additional 6-month extension on top of the default 4-month window to host your AGM – so in light of COVID-19, co-operatives will have a 10-month window after the end of their fiscal year to host their AGM.

The Act states in s.149 that unless the association’s rules provide otherwise, a member or investment shareholder may attend and vote at a general meeting by telephone or other communications medium if all members or investment shareholders participating in the meeting, whether by telephone, other communications medium or in person, are able to communicate with each other. Unless your co-op’s Rules have an explicit clause that specifically requires an in-person quorum, standard co-operative Rules (the Schedule B Rules provided for in the regulations under the Act) permit virtual AGMs.

First, check what your Rules say about voting. The Schedule B Rules state that if one or more members vote at the meeting by telephone or other communications medium, the voting must be by poll or conducted in any other manner that adequately discloses the intentions of the members. In other words, if there is an online AGM those members attending may vote by email or other means, as long as it is possible to accurately tally the votes. In the case of a small co-op, it may be possible to ask each member orally how they vote. This may not be feasible for larger co-ops though.

The Schedule B Rules also say (Rule 83) that a member attending an AGM may request a poll be taken either before or after a show of hands, and that the poll must be taken either at the meeting or within 7 days after the date of the meeting “at the place that the chair of the meeting directs”. This may be a useful option if there is a technical problem with in-meeting voting!

The Schedule B Rules require (Rule 89) that each ballot cast on a poll must be kept at the registered office of the Association for 3 months after the general meeting, and during that time must be open for inspection by any member or proxy holder entitled to vote at the meeting.

The Act says that at the AGM the members must be presented with financials for the latest completed financial year, current to a date not more than 4 months before the annual general meeting.  If due to COVID-19 you can’t hold an AGM within 4 months of the financial year end, then consider having “stub” financials to bring you up to a date within the 4-month period.

What if you don’t have quorum?

First, check the quorum requirements. The Act doesn’t set quorum, but the Schedule B Rules says quorum is 10% of the total number of members entitled to vote at the meeting.  They also provide that if the quorum isn’t present within an hour of the time set for the meeting, it will be adjourned to the same day, time, and place the following week. If a quorum isn’t present within half an hour of the time for the adjourned meeting, then the members present (including those attending by proxy) are deemed to constitute a quorum.

Want to learn more about each topic and listen to the questions from the audience? Check out the full video recording!

Legal doctrines of Impossibility and Frustration: 14:36