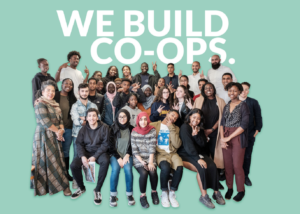 What do Mavins Marketing, Queens of Pop, Open City Events, Fusion Five, BLAC: The Black Arts Centre, Just.Us Instincts, and Daily Dose of Blackness all have in common? They are all co-ops associated with Solid State Community Industries.

Using the co-op model, Solid State works with youth from racialized backgrounds to form enterprises to earn an income for themselves or to serve others in the community. Through the process of building worker’s co-ops, youth living in Surrey BC gain skills training, education in business and life skills, and an understanding of various business models. Co-ops that have emerged from Solid State span a wide variety of fields – from web design to catering and gourmet popcorn, from event planning to art galleries and performance space.

More importantly, the Solid State model is fundamentally about building long-term attachments and commitments. Matt Hern, founder and Co-director, holds a deep belief that by working cooperatively over an extended period, youth develop a new sense of place and belonging, and a different way of being in the world.

After only three years in operation, Solid State has tripled the number of people they serve, expanding from 3 cohorts in September 2019 to 13 – one year later. They have also tripled their staff capacity, moved into a bigger and brighter location, and were even featured in the national TV show, Holmes on Holmes. As Hearn explains “so much good happened at Solid State this year, which is a little baffling given how much was happening around us. In the face of a epidemics of police killings, racist and xenophobic violence, a pandemic, deepening climate change and economic precarity, Solid State felt like a place of everyday conviviality, shared meals, exciting and productive work, and so much good-humoured hopefulness.”

Archana Ananthanarayan, Co-Director of Solid State, credits the success of the model to the hard work, perseverance, creativity and sheer intelligence of the youth who work on their co-ops every day. She notes that “in a time when young people are so often derided as lazy and self-absorbed, the youth at Solid State demolish those characterizations thoroughly!”

With approximately 90+ co-op members and a whole community of friends and supporters, the awareness of Solid State’s successes has also increased significantly, and they are getting many requests to partner and co-create. Going forward, Solid State has plans to continue to grow. It has a goal for 2021 to continue to contribute to a solidarity economy by seeding hubs in other locations, starting with New Brunswick and Nova Scotia. Ananthanarayan notes that they have stepped up their work in response to the pandemic and the associated job losses and says that “this is a time for organizations like us to step up and help create and protect jobs”. We at BCCA couldn’t agree more.

To learn more about this fantastic group of disrupters and their co-ops, check them out at https://solidstate.coop

Please use this link to return to the BCCA News page