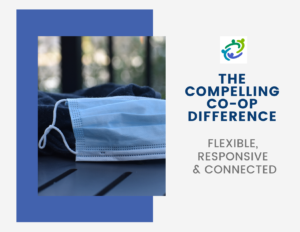 While the world is facing an unprecedented health and economic crisis, co-operatives in industry and services are reorganizing themselves, finding strength in the people and communities they serve.

It’s not surprising to social-economic strategists that COVID-19 spurred Canada’s co-operative sector to step up and respond to the needs of communities immediately. In many cases, co-ops responded sooner and more concretely than the federal, provincial and local governments as well as large corporations.

Co-operatives are already one step ahead.

By their very nature, co-operatives are already one step ahead of many other organizations for responding to crises. Firstly, because of the connected and action-oriented role, they play in communities. And, despite the difficulties, co-operatives are demonstrating their strength to reorganize, regroup and respond.

Co-ops Rise to the Challenge

By March 16, Vancity Credit Union deferred payments and reduced credit card interest rates for people most affected by the pandemic to zero. As of April 9, no commercial bank in Canada had gone as far as Vancity in offering credit relief.

By March 18, Vancity Credit Union had also partnered with charities to form the Community Response Fund.  As of April 8, donations to the relief fund totalled $6 million and helped 33 nonprofits and charities.

The co-operative way is a time-tested model.

Across Canada, co-operatives quickly responded because they knew what their members and communities need and want. Co-ops listened and responded.  Caring for their community is integral to economic, social, and cultural needs and aspirations. Rather than being a singled-out hero-of-the-day, the co-operative way is a time-tested model that serves and supports its people and community.

Please use this link to return to the BCCA News page